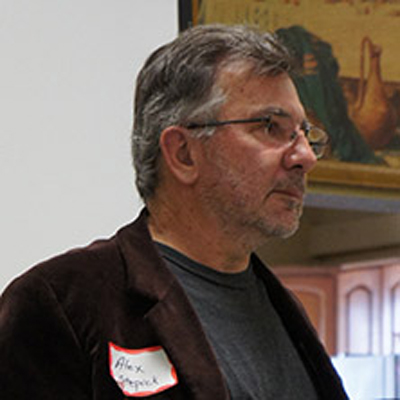 Alex Stepick Professor of Global and Sociocultural Studies at Florida International University in Miami and Professor of Sociology at Portland State University. He has been conducting research on the impact of immigration on Miami for the past 30 years. His co-authored book, City on the Edge, on how immigration has changed Miami, won two national awards, the Robert Park Award for the best book in Urban Sociology and the Anthony Leeds Award for the best book in Urban Anthropology. A follow-up book, This Land Is Our Land, was hailed as pathsetting. His book, Pride Against Prejudice: Haitians in the United States has already gone through numerous printings. He has also published three books on immigration and religion that have received acclaim.

The American Anthropological Association and the Society for Applied Anthropology awarded him the Margaret Mead Award for his work with Haitian refugees. His law review article on U.S. refugee and asylum law is used as a definitive reference in classrooms at major law schools throughout the U.S. He has received grants from all the major scientific research institutions, including the largest grant ever in Cultural Anthropology from the National Science Foundation.

Alex Stepick received his B.A. in Anthropology at the University of California at Santa Cruz, and his Ph.D. in Social Sciences at the University of California at Irvine. He had a postdoctoral fellowship at Duke University, was a Visiting Professor at the Johns Hopkins University, and a Fulbright Fellow twice first in Oaxaca, Mexico and then in Berlin, Germany. During 1994-95, he was a Visiting Scholar at the prestigious Russell Sage Foundation in New York.